The Mystery Bridge to the Breath of Life

By Jane Barthelemy. How does an ancient Chinese love story connect to modern cranial osteopathy? This poem contains a secret metaphor for health and longevity, linking the wisdom of two distant times and cultures. What does it mean?

On the surface the poem appears to tell how to Ascend to the Magpie Bridge. What’s that? Well, the Magpie Bridge refers to an ancient Chinese legend of two lovers separated in different worlds above and below, and a flock of magpies that create a living bridge between Heaven and Earth so they can meet once a year. It’s a beautiful story, scroll down to read it. The metaphor of connecting earth and sky, Yin and Yang, has a very different and deeper meaning in Daoist Qigong practice. The Magpie Bridge called Da Qiao 搭橋, means bridge or bypass. In Qigong it refers to placing the tongue on the roof of the mouth to connect the Yin and Yang channels of the body. These two channels are the Du Mai (Governing Vessel) and the Ren Mai (Conception vessel). They are two extraordinary meridians in Chinese medicine that flow up the back of the body and down the front respectively. The Du Mai and Ren Mai are the first meridians to form in an embryo immediately after conception; and they give rise to all the other meridians. Their function is to connect the body to Earth and Heaven. These two channels, representing Yin and Yang, meet at the upper palate.

In Qigong practice it is a traditional practice to rest the tongue lightly against the upper hard palate just behind the teeth. This connects the Yin and Yang channels in the body and completes the microcosmic orbit, promoting higher energy flow in the body. In turn, the enhanced energy in Du Mai and Ren Mai channels supports all the other channels, and builds optimum health. 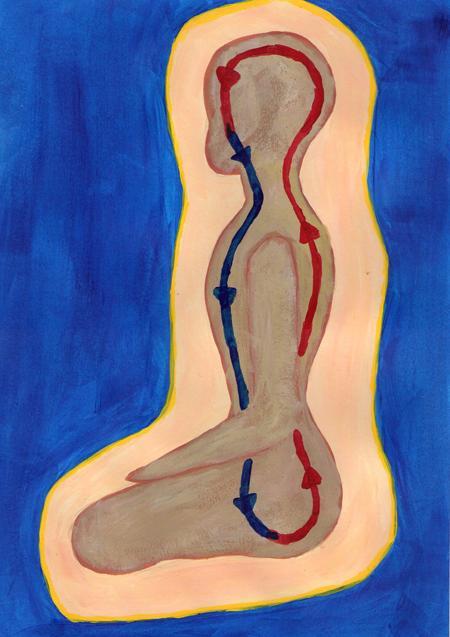 The practice of connecting the Yin and Yang meridians promotes the Breath of Life observed in craniosacral therapy, which is the flow of the cerebro-spinal fluid up and down the midline of the body. Cerebrospinal fluid can be likened to a river in the body. This deepest vital force is often called the tide. The tide is the essence of life. The Breath of Life in cerebrospinal fluid stimulates healthy brain function, assists musculoskeletal alignment, promotes freedom of movement in the body, supports all organs, and connects to spirit.

Dr. William Sutherland, father of Cranial Osteopathy, describes the Breath of Life in this way:

“Within the cerebrospinal fluid there is an invisible element that I refer to as the ‘Breath of Life.’ I want you to visualize this Breath of Life as a fluid within the fluid, something that does not mix, something that has potency as the thing that makes it move. Is it really necessary to know what makes the fluid move? Visualize a potency, an intelligent potency, that is more intelligent than your own human mentality.”

It is beautiful to see unity between ancient and modern wisdom. Although we use different language, words and images, the metaphor of connecting the physical body to spirit is identical.

Here’s the Legend of Two Lovers and the Magpie Bridge

Once upon a time, a young cowherd Niulang met a beautiful weaver girl Zhinü, daughter of the Heavenly Goddess. Zhinü had just escaped from her boring life in heaven to look for fun on Earth. Zhinü soon fell in love with Niulang, and they got married without the knowledge of her mother the Heavenly Goddess. Zhinü proved to be a wonderful wife, and Niulang to be a good husband. They lived happily and had two children. But the Goddess of Heaven found out that her daughter Zhinü, a young fairy goddess, had married a mere mortal. The Goddess was furious and ordered Zhinü to return to heaven, to her former duty of weaving colorful clouds, a task she had neglected while living on earth with a mere mortal. She sent cruel warriors to drag the girl home up into the clouds.

Left alone on Earth, Niulang was very sad that his beautiful wife had been taken away. Suddenly, his ox began to talk, telling him that if he killed it and wrapped himself in its hide, he would be able to go up to Heaven to find his wife. Crying bitterly, Niulang killed the ox, put on the skin, and carried his two beloved children off to Heaven to find Zhinü. The Goddess discovered this and was filled with rage. Taking out her sharp hairpin, the Goddess angrily scratched a wide river of stars, a long hole in the sky to separate the two lovers forever, thus forming the Milky Way that extended all the way between the two distant stars Altair and Vega.

Ever after, Zhinü must sit forever on her side of the river of stars, sadly weaving clouds on her loom, while Niulang watches her from afar, looking after their two children, represented by the stars Hè Gu 1 and Hè Gu 3.

But once a year all the magpies in the world take pity on the lovers and fly up into heaven to form a bridge 鹊桥, the Magpie Bridge over the star Deneb in the Cygnus constellation, so the family can unite, and  Zhinü and Niulang can be together for a single night.

The magpie is one of the most intelligent birds on Earth, a symbol of love. In China the Qixi Festival celebrates the annual meeting of the cowherd and weaver goddess in Chinese mythology. It always falls on the seventh day of the seventh month on the Chinese calendar. It is a festival of love, sometimes called Night of Sevens, Magpie Festival, or Chinese Valentine’s Day.

Try it now…
Place your tongue lightly behind the upper teeth, and allow the tongue to relax completely. Take a breath. Feel the increased connection between your spine and the top of your head. Feel a connection between the top of your head and your tailbone. Notice a flow between your upper and lower body. Try using this tongue placement as you meditate, study, sleep, or move. You will find it subtly connects your energetic body from head to toe and promotes optimum wellbeing. You will feel more refreshed, relaxed and calm. This is the ancient secret of health and longevity.

Daoism is full of metaphors and secret meanings!
Forgive me for the simplistic explanation. In reality there is a bit more to it. The Yin and Yang exchange is reflected first in the Du Mai and Ren Mai channels. It follows to connect all eight extraordinary meridians. These in turn vitalize the twelve organ meridians in Chinese medicine. Similarly in cranial osteopathy, the Breath of Life permeates the Tide of craniosacral fluid in the brain and spine, vitalizing the crystalline liquids, tissues, organs and bones, to promote health in every body function.

“True Water is inside Water. True Fire is inside Fire. If Fire and Water are connected, you will never get old. Water can flow down. Fire can flame up. The True Water rises through the Dumai channel, reaches the Magpie Bridge, goes down through the Renmai channel and sinks into the lower Dantian. The stream through Ren and Du is the Small Heavenly Circuit. We are melting the elixir and perfecting the Tao.”